Do You see this face? Is this the face of someone who is having a good day??? I don't think so. This face, my face, is the face of someone who is stinking mad.
Why? Why am I so mad?? Well, I'll tell you. Today, I went to get my hair cut by a man who has cut my hair for the last 2 years. He has cut my hair at least 10 times in the current hairstyle that I have. Flipped out in the back, long bang in the front. Always the same. Well, today I walked in and he said, "Same thing as last time so you can kind of flip it or spike it in the back?" and I replied "Yes, it's gotten a little long and is getting hard to style, so it needs to be shorter. " Okay, this is our usual communication and he has never really botched it up....until today. 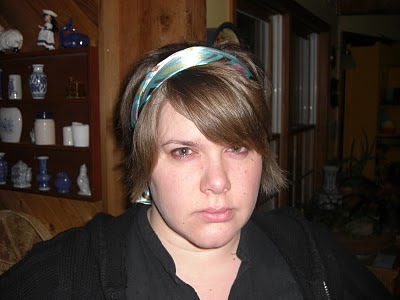 This, my friends, is why I am so mad. Somehow, Eddie thought that what I really meant is that I wanted an A-Line. So, he got out his clippers and SHAVED ONE INCH INTO MY HAIR LINE!!!! What was he thinking? Now, it's not unusual for him to take his clippers and trim along the hairline just to clean it up a bit. So, I didn't think anything of it and didn't realize that he was "trimming" so high. I mean, really, how often do you have someone trim the back of your head? I have no concept by feel alone of how high someone is touching the back of my neck. So, he cut my hair and spun me around and I just about died. 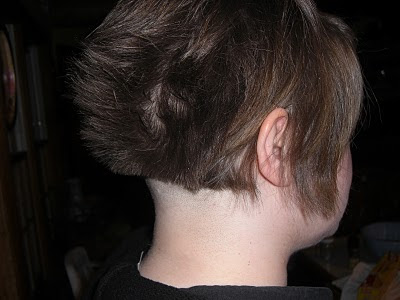 So, I said, "Eddie, you shaved an inch into my hairline!" And his response was "Isn't that what we always do???" At this point my jaw has dropped and I'm trying not to hyperventilate. So I said "No, we NEVER do that EVER! It's always at least Half of an inch long at the base of my hairline!" And his response was "Well, I thought you wanted an A=Line and since it was so short in the front, I shaved it to look like an A=Line. Let me see if I can fix it" YEAH RIGHT! You can't glue the hair back on! "Um, I don't think there is anything you can do." At this point I was barely holding it together. So, he said he wouldn't charge me and that I should come back as it grows in and he'll blend it together. I seriously doubt that I'll be going back. As I left I was already crying and he was apologizing profusely as I walked out the door. I got in the car and sobbed my way home where I continued to sob and mutter (AKA Yell) the occasional "What the HELL was he thinking!" To that, all I can think is that he wasn't thinking at all. 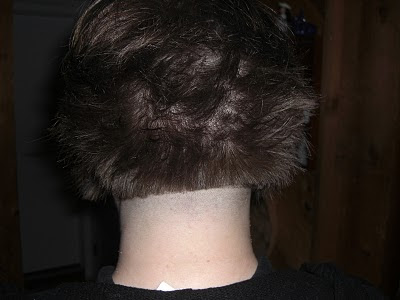 So, the possible solutions, 1. A WIG 2. Some goth make-up with a black leather and spike dog collar. or 3. A plethora of scarves that I can tie around my head with a big bow at the back until it grows. As you can see in the picture, it's going to take a big bow. So, if you wonder how I look there it is. AND to add insult to injury, I got my camera out to take pictures and guess what? The LCD screen has somehow broken so you can't see what you're taking pictures of! I have no idea how that happened, but it's so frustrating. 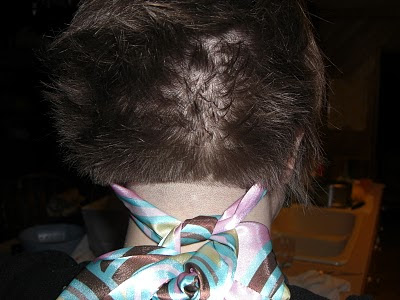