What I've Been Making

So I haven't blogged in forever and I thought I would just start by putting up a few pictures of what I've been making. I attempted to make a hexagon quilt that I thought was going to be awesome.....until I put is all together and realized that the green was a little blaring.   So, I took out all of the green pieces from the original quilt and made a smaller version  of the quilt using all of the green.  I thought it would be too ugly to do anything with, but it actually turned out alright.  I decided that this would be a good quilt to try to machine quilt since I didn't care about it that much anyway, so if I ruined it it wouldn't be the end of the world.  I sewed light blue ric rac around the center of all of the green.  I think it looks really good.
I have been wanting to make a foot stool for my grandmother's little green rocking chair that now sits in my room.  It's a super comfortable chair, but it's a little low, which made it really difficult to find something the right height.  So, with some help from my brother and my mom, I made this little foot stool.  I love the fabric I found.  It has a slightly sueded feel to it and looks like faux tooled leather. 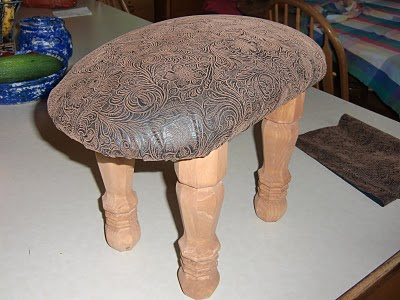 This is a purse I made for my friend Kami out of corduroy and a couple of left over quilt blocks that I used to make her a quilt for her wedding.  It's completely reversible and turned out really well. I do have to say that sewing on that bias tape around the whole thing ended up defeating me after I had unpicked it 3 times. Mom finished that part of it for me because I was so frustrated at that point that I was ready to chuck it and just go buy a purse!  Anyway.... thanks to her, it ended up getting done. (Thanks mom, you're the best!) 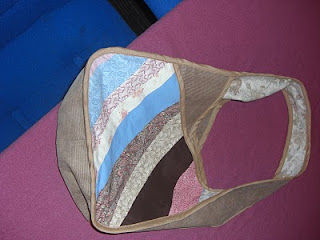 Finally, I have been making these name banners for my nieces and nephews throughout the year. (Thanks for the idea Liz and Sarah!)  I don't have pictures of all of them, but here are a few of them. 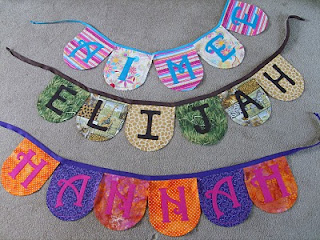 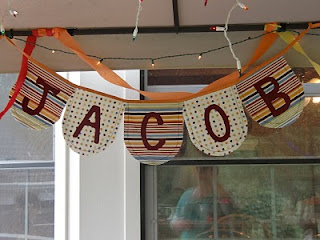 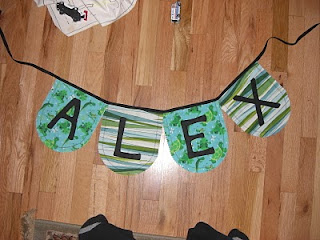